I am always looking for variations on the gluten free bread theme and so thought I would try this recipe. 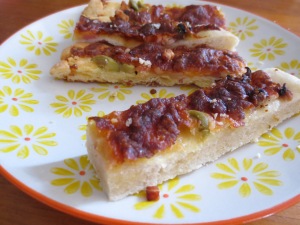 As a taste test, I made half the dough mixture for this recipe and then used 1/2 pkt Well & Good Crusty Bread Mix to make the second focaccia.

The bonus of this recipe is that there is no proving time so is much quicker to make.  My GF son’s preference though was the one made with bread dough.

In a large frying pan, heat oil on high. Saute bacon for 3 – 4 minutes until golden. Drain on paper towel.

In a saucepan, combine milk, oil and salt. Bring to boil  Transfer to heatproof bowl.

Gradually add in flour stirring.  Mix in egg and cheese.

Turn onto floured surface and knead until smooth.  Roll into large rectangle and sprinkle with 1/2 olives and 1/2 bacon.

Divide dough in half.  Roll each half between 2 sheets of baking paper to a 25cm rectangle.

Drizzle with extra oil, scatter with extra cheese and remaining bacon and olives.

(from a weekly magazine)